In the x265 Encoder ver 3.0, the default parameters for “veryslow” and “slower” presets are changed. In this blog we will discuss this modification in detail.

The all new ‘veryslow’ Preset

The “veryslow” preset is one of the most preferred presets by the offline encoding vendors, where the video quality is paramount. Hence, the quality of encoded bitstream is the key feature for this preset than the encoding speed. Hence, this preset targets at improving the quality of the encoded video at a given bitrate while performing extensive computations. This preset can be enabled by specifying the CLI option “–preset veryslow” or “–preset 8” with x265. After performing a bunch of evaluations and finally come up with the following changes in the default settings of the four key parameters in x265 ver 3.0 under the “veryslow” preset.

The significance of these modified params is described below.

All the above-mentioned features have a direct impact on the visual quality (both subjective and objective) of the encoded bitstream, but with the penalty of slightly increased encoding time. We have performed a series of experiments to evaluate the speed vs quality trade-off with the new “veryslow” preset against the previous version.

The sequences that we have chosen for our experiments are listed in Table 1. We have used 4 different resolutions with different source FPS (not to be confused with the encoding fps) and bit-depth. All the experiments are carried out on a Dual-Xeon Linux-based server with 56 cores and 112 threads in a a sequential order.

In Table 2 the improvements in quality under the “slower” and “veryslow” presets in version 3.0 over version 2.9 are shown. We have computed the BD-PSNR and BD-SSIM metrics to represent the improvement in encoding efficiency in the x65 version 3.0 by making the version 2.9 as the anchor. The positive values of BD-PSNR and BD-SSIM imply the improvement of encoding efficiency (quality). The values in each row of this table indicate the average value of all the test samples under a particular resolution. From this table, it is quite clear that the new version of x265 has significant improvement in quality compared to the older one for these presets.

As pointed out in the previous section, the improvement in encoding efficiency is expected to slow down the performance (encoding fps). Hence, it is important to gauge the effect of the newer presets on performance. Table 3 shows the performance results of x265 version 3.0 in comparison with those of version 2.9 under the “slower” and “veryslow” presets. These are the encoding FPS values averaged under each resolution.

From Table 3 it is evident that the new “veryslow” and “slower” presets are significantly slower than the older version. However, the performance drop with the new “slower” from the older “veryslow” (represented under the column “ΔFPS% (slower_3.0 vs veryslow_2.9)”) is quite negligible. Hence, for the customers who need maintain the same performance as the “veryslow” preset of x265 version 2.9, are recommended to use the new “slower” preset of x265 version 3.0. 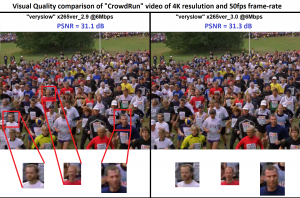 Both the versions of x265 can be downloaded from here.

The CLIs we ran to perform these tests are: